Here are a couple of quick ways to hear my new album, "Approaching End of Usable Life!" Just click the buttons! 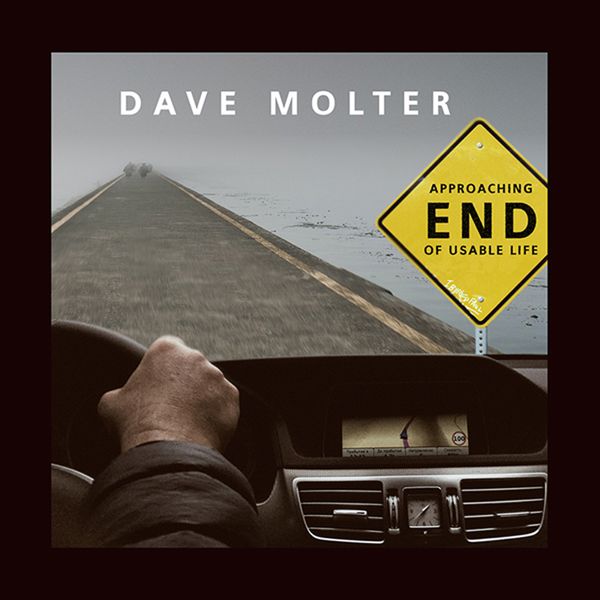 The first vocal collaboration between Dave Molter & Annemarie Picerno, "All the Answers" tells the story of a wandering minstrel who strays a bit too far, only to be put in his place by his jilted lover. "This is a cautionary tale," says Molter, who admits that the tune is semi-autobiographical. "It's one of my oldest songs. I wanted a

The first vocal collaboration between Dave Molter & Annemarie Picerno, "All the Answers" tells the story of a wandering minstrel who strays a bit too far, only to be put in his place by his jilted lover. "This is a cautionary tale," says Molter, who admits that the tune is semi-autobiographical. "It's one of my oldest songs. I wanted a powerful female presence to share vocals, and when I heard Annemarie's duet "Money Pain" (with Bob McGilpin), I knew she'd be the perfect foil for my somewhat dim-witted protagonist." Dave and Annemarie have never met in person — she laid down her soulful, over-the-top vocal in Nashville. Smooth guitar by Danny Gochnour (Houserockers) and tight lines from Pittsburgh's premiere brass section, The Soulville Horns add just the right touches, and the drumming of Joey Waslousky and piano by Snyder make for a cohesive whole.

One year in the making, Approaching End of Usable Life is a collection of tunes in a variety of styles, from Who-like rockers to R&B and old-school love songs. The tracks were recorded at Albey Road Studio in Pittsburgh under the watchful eye of producer/mad scientist Al Snyder, who also worked his songmeister magic as co-writer of four songs.

A Christmas song for trying times

"Where is Christmas" — a collaboration between #1 indie artist Dave Molter and veteran performer and producer Al Snyder— is now available for purchase right here on this site https://davemoltermusic.com/track/2538263/where-is-christmas

The song is also available from all online music outlets (Amazon, Apple, iTunes & more) as well as streaming on Spotify.

Working with lyrics provided by Molter, Snyder supplemented and focused their sentiments, then composed and sang a beautiful, poignant melody.

But "Where Is Christmas" is not a jolly, "Ho-Ho-Ho" Christmas song, and for very good reasons.

December 25, 2020, was a holiday unlike any other in our lifetimes. We all had hopes that 2021 might be different. But with COVID-19 social distancing protocols in place in many parts of the world and the Delta Variant still infecting millions, many families and friends still will not be able to gather for traditional yuletide celebrations. It's tough to be apart at the holidays in any year, but "Where Is Christmas" has special poignancy in this decade.

BUY "WHERE IS CHRISTMAS"

A splendid review from The Ark of Music!
In its review of Bongo Boy Records' "Let's Have A Rockin' Christmas Vol. 5"  complilation, The Ark of Music singled out  "Where Is Christmas?" for special praise! here'swhat they had to say:

Where Is Christmas? – a soulful, singer-songwriter ballad by Dave Molter and Al Snyder – is a real highlight on this compilation. While it might not be the most jovial or spirited track on this project, its somber message is so appropriate for this difficult year, where so many are celebrating the holidays in a way that feels foreign and disjointed. The track muses particularly on the theme of not quite being able to get into the holiday spirit when a certain loved one isn’t around, another difficult facet of this year that so many of us have been tasked with. Between the heartfelt lyrics and the classic pop-Christmas song production featuring a bell-toned piano and gentle strings, this song will resonate with just about anyone who’s coming into the holiday season after a difficult 2020."

Back in the good old days when bands released 45 RPM records, there was a thing known as the "double A side" single. This meant that the band thought each side of the record was worthy of airplay and might be a hit. The Beatles had great success with this approach: 14 double A's!

Double A sides are rare in this day of digital downloads: Artists usually just throw everything out at once and see what sticks.  I’m no different.  But this time I’m making a concerted effort to pitch two tunes at the same time to indie radio.

Both tunes are on my latest CD, “It Was You,” and they’re already available as singles on Spotify and all major streaming platforms. Anyone who knows me knows I view Spotify as a necessary evil in today’s music market.  I hope that if you like these songs, you’ll see fit to buy them.

"One Little Push" and "It Will Always Be True" couldn't be more different stylistically. “Push” is a stripped-down, funky thang with almost tribal drums from Joey Waslousky and synth goodness from Al Snyder, my producer. I’m playing bass and, admittedly, stealing a lick from the great Tony Levin.

“It Will Always Be True” is a more traditional song which at time reminds me of something that Paul McCartney and Wings might have released in the mid-Seventies. But it might easily be called country. Joey Waslousky again plays drums; Al Snyder adds keyboards and backing vocals (along with me); Danny Gochnour plays perfect guitar; and I channel McCartney on my Hofner Club Bass.

As is usual with most of my songs, the lyrics tell a story related about relationships.

In “Push,” our protagonist is a guy who feels he has been manipulated by a woman, but I think the sentiment would be equally valid from a female point of view. Sometimes you get into a situation where you know your lover is manipulating you into doing something you really don’t want to do. Maybe he or she uses sex, or shame to twist your arm. Whatever the case, most people eventually tire of the game and move on. So it is with this singer.

This tune began life as a Stevie Wonder-like funky rocker. Kudos to Al for helping to shape the lyrics to fit the stripped-down format he came up with.

“True” is a love song of a different kind, one meant to assure the listeners that if they have doubts or feel that they are the only one who has problems, there is always someone to help them through rough times. When I sing about love in this context, it could be traditional romantic love or just the love between two friends. Although the word “darlin’” is here, the lyrics apply to any relationship. Basically, it’s the old saw: “You have to be happy with yourself before you can be happy with anyone else.” At my age, I know it to be true.

Buy "One Little Push"
buy "It Will Always be true"

Just found this video of my first #1 single, "Foolish Heart."  This was recorded at a Danny Gochnour CD release show at Club Cafe in Pittsburgh in September 2019. Danny is the guitarist and the rest of the band was Joe Munroe on keys; Steve Weiss on violin; and Mark Pollera on drums. Danny was kind enough to allow me to do this song, and it was a great night  for all!

Let Me Down Easy

"Let Me Down Easy" debuted at #1 on indie stations in the U.K. and Australia! A breakup is never easy. It's a slap in the face, a bucket of cold water on your heart. Sometimes there's no easy way out of a bad relationship. But we can all hope that when the times comes, we'll be let down easy.

"IT WAS YOU" EP NOW AVAILABLE!

It Was You, my latest EP, is nominated for  the US Album of the Year Award at the 2021 International Singer Songwriters Association Awards!

It's a 7-song compendium of styles that range from British music hall ditties to funky, swampy, bluesy rock!  It's a great way to usher out a trying, depressing year.

The title track is an upbeat, poppy tribute to the carefree days of the mid-Sixties, when songs by the Turtles, Monkees, Kinks and others gave people a reason to be happy.

GET YOUR HEART ON

There Goes My Heart

A tribute to the Buck Owens "Bakersfield Sound" era of U.S. country music in the Sixties, updated.

A tribute to a friend and brother

In honor of Buddy Hall

"Late December" is a tribute to my friend and producer Buddy Hall, who passed away Jan. 29, 2021. The outstanding guitar solos are by Reb Beach of Whitesnake, Winger, Black Swan and others well known heavy rock bands. We conceived this song as an album-ender, so it's 8 minutes long with the fadeout. It hearkens back to the days of Album Oriented Rock FM stations that would play an entire LP late at night. This is the last tune that Buddy and I worked on.

(REALLY NOTHIN' NEW) UNDER THE SUN

(Really Nothin' New) Under the Sun

After a crazy summer in a crazy year, Bongo Boy Records has announced the official release date for "Backroom Blues Vol. 9!"  "Fading Away" will be included on this great compilation! Order your copy now by clicking on the cover pic!!

BACK IN THE STUDIO

Back in the studio!

Help underwrite my next CD

I'm back in the studio with producer Al Snyder!

We've just released a new single (Really Nothin' New) Under the Sun, and plan to have a new EP out before Christmas 2020.  Manufacturing of the first 100 CDs is paid for. But YOU can help offset recording costs and get an signed, personalized CD for a donation of $10 or more. Just click the button below!

Thanks for your continued support and very gracious feedback on my debut EP, "Foolish Heart," and the followup singles, "Oh Woman, Don't You Cry" and  "Lemmings."

Stay safe, and spread the words about Peace and Love wherever you go!